JAHSENA, the Jewish Archives and Historical Society of Edmonton and Northern Alberta, was established as a non-profit society in Alberta in 1996. Its founder, Uri Rosenzweig, had the idea to write a history of the Edmonton Jewish Community to celebrate its centennial in 1993, and so founded the Society in order to write the book, and to look after the materials collected during the process. The Society is independent of any Synagogue or religious denomination, or any umbrella Jewish Organization. JAHSENA collects the records of all Jewish organizations, Synagogues and individuals resident in the Northern half of the Province of Alberta. The book, “A Century of Jewish Life in Edmonton and Northern Alberta, 1893-1993,” was published in 2000, and that same year, the Society hired their first Archivist, Debby Shoctor. Since that time, the Society’s holdings have grown to 150 metres, housed in its offices at the Jewish Community Centre of Edmonton.

To date, 250 of our most important fonds are listed on the ANA database, and we have almost 1000 images on Alberta In Sight, and almost 200 textual images on Alberta In Word. Some of our most important fonds include the Peter Owen fonds, which will soon be featured on the ASA website exhibition, “Letters from the Trunk;” the Abraham Shnitka fonds (King’s Printer, and sole Yiddish printer west of Winnipeg); the fonds of the Beth Israel and Beth Shalom Synagogues; our Oral History Committee fonds, containing 200 oral history interviews of community members; and our collection of Edmonton Jewish Newspapers. Our archives also holds almost 15,000 photographic images, over 200 films and videos, and almost 200 bound volumes.

The Society exists to preserve and protect the Jewish heritage of Edmonton and Northern Alberta through the collection of archival documents and audiovisual materials for the use of present and future generations.

-To preserve the Jewish heritage of our communities through proper archival acquisition, housing, arrangement, cataloguing, preservation, restoration and access of collected materials;

-To promote interest in the history of these communities and our archives through educational and publication projects;

-To actively collect archival items from members and organizations of the community;

-To pursue funding to continue the programs of the Society on a permanent basis;

-To work closely with the Provincial Archives of Alberta to support JAHSENA and its projects on an ongoing basis;

-To work closely with the Archives Society of Alberta to catalogue our materials according to RAD and include them on the databases provided on the ASA website, namely Archives Network of Alberta, Alberta in Sight, Alberta in Word, and ultimately, the Canadian Archives Information Network.

-To encourage researchers in University level programs of all sorts, but especially in Jewish Studies programs, to use our collection for research purposes and as the basis for academic papers.

-To help members of the Jewish and General Communities with their research queries and reference questions.

-The housing of these records in a proper, controlled environment, where they will be safe and secure from the adverse effects of the environment or mishandling.

-The recording and transcribing of oral histories of members of the community.

-The photographing and description of the Edmonton Jewish cemetery.

-The recording and videotaping of the accounts of Holocaust survivors and second-generation members of the community.

-The collection of artifacts for periodic exhibition within the community and elsewhere.

-The writing and publication of articles on the history of the community in its more widely distributed publications.

-The collection of miscellaneous, non-archival materials relating to the history of the Jewish communities of Edmonton and Northern Alberta, such as: plaques, memorabilia, awards, statues, textiles and other ephemera, perhaps for the creation of a museum branch of the society.

– Access to the collection is available to all members of the community during office hours or by appointment, for reference purposes only.

– Reproduction or duplication of certain items can be done for a fee.

– Material may be restricted based on copyright, legal or personal considerations as well as conservation/preservation reasons.

– No person shall be prevented from using the records acquired by the archives unless it is deemed that the material will be physically endangered or used in an illegal manner.

-Our collection is presently handicapped accessible and we will try to maintain that wherever we may move to.

-Publication of “The First Century of Jewish Life in Edmonton and Northern Alberta: 1893-1993.”

-The establishment of a permanent office for the society within the Edmonton Jewish Community Centre.

-The development of a permanent relationship with the Provincial Archives of Alberta for repository of more fragile materials, such as film and nitrite negatives.

-Membership in and participation in the Archives Society of Alberta and the Association of Canadian Archives.

-Membership in and participation in the Association for Canadian Jewish Studies

-The procurement of long-term sources of funding for the organization through grants and a Casino licence.

-The creation of an active Board and Executive.

-The employment of a professional Director and Archivist for the Society.

-The production of two documentary films on the history of the community: “From Pedlars to Patriarchs: A Legacy Remembered,” and “Bittersweet Memories: The War Years.”

-The production and mounting of exhibits, both permanent and temporary, throughout the community and on the World Wide Web.

-The re-creation of the H.B. Kline Jewelry store at Fort Edmonton Park.

Our family records include those of Abraham Shnitka, King’s Printer, and the only Yiddish printer in Western Canada; Elchanan Hanson, the Jewish Jack London, Morris “Two-Gun” Cohen; Jewish fur traders Abe Aaron and Sam Kushner; Peter Owen, the only Jewish child allowed to immigrate alone to Canada during the Holocaust; the photography collection of Fred Katz, who photographed may Jewish simchas from 1985 on; the records of the Sigma Alpha Mu Jewish Fraternity at the University of Alberta, the records of Joe Shoctor, founder of the Citadel Theatre, the records of Hollywood Director Arthur Hiller, of Cecil “Tiger” Goldstick, Edmonton Sports legend; and of his father, Hyman Goldstick, Edmonton’s first Rabbi. 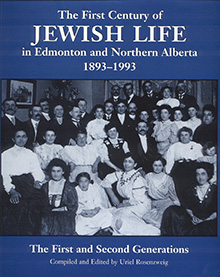 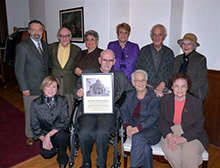 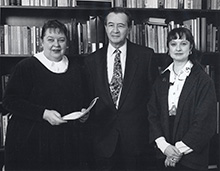 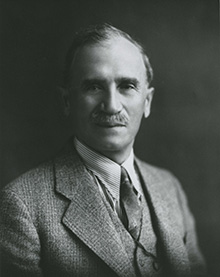 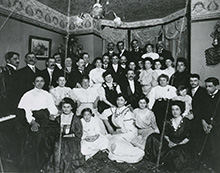 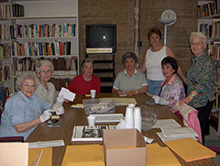 All fields are optional
Advanced Search